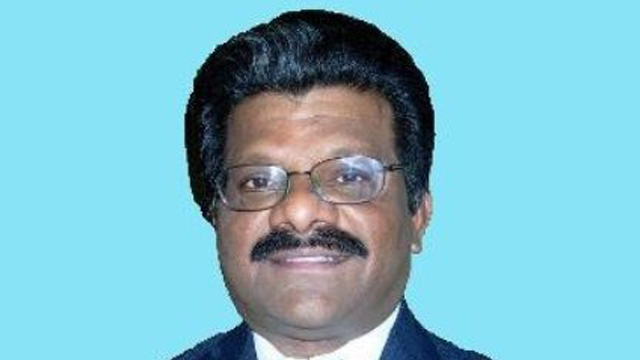 The increase in new investment intentions by the Central government-owned PSUs and privatepromoters led to increase in both new projects and new investment planned therein in Q2/FY22. Further, lifting of restrictions on running public transport system, factories and offices following the fall in number of COVID-19 cases also enabled resumption of capex activities across the country.

In the second quarter ended September 2021, not only fresh investment turned positive, but also the other two indicators of capex activities – project tendering and project contracts registered impressive growth.

Private preference for investment was seen in Food Processing, Drugs & Pharma, Plastic Products, Electronics, Automobiles, Data Centres and Textiles. These were also the sectors to which the government extended incentives under the Production Linked Incentive (PLI) Scheme.

A comparison of investment statistics between H1/FY20 and H1/FY22 indicated that of the five major sectors, barring the Manufacturing and Electricity, other sectors registered a fall in both the number of new projects and investment committed therein. While the increase was the most impressive in the Manufacturing sector, the fall was the deepest in the Irrigation sector.

Within the Manufacturing sector, Food Processing, Textiles, Pharmaceuticals, Electronics and Automobiles saw a sharp rise in new projects announcement in H1/FY22. All these sectors have been offered incentives by the Central government under the PLI Scheme. In addition to these sectors, Basic Metals like Steel, Aluminiumand Copper also saw impressive increase in fresh investment.

Despite increase in fresh investment by Coal India and its subsidiaries, the total fresh investment announced in the Mining sector in H1/FY22 fell by 6.15 percentcompared to H1/FY20 figures. As against Rs 40,608.04 crore of new investment intentions announced two years ago, the H1/FY22 period saw new investment of Rs 38,110.69 crore. Among the new coal mining projects, Central Coalfields worth Rs 5,198 crore,BarkasayalMine Development Project and an Rs 5,136 crore Amrapali Opencast Coal Mining Project were the largest ones.

While a bulk of the fresh investment came from Coal India and its subsidiaries in the Coal Mining sector, Rungta Mines and the Odisha Mining Corporation announced two mega iron ore mining projects in Odisha.

While the Central government intends to spend around Rs 111 lakh crore on infrastructure building in India, at ground level barring a few sub-sectors like Water Distribution and Treatment, Roadways and new Data Center projects, all other sectors registered negative growth in fresh investment in H1/FY22 vis-a-vis H1/FY20. Consequentially, the total fresh investment in sector declined by 24.64 percent in the first six months of FY22.

A total of 689 water distribution and water treatment projects with an investment intention of Rs 27,638.5 crore posted a healthy growth of 58.64 percent vis-a-vis comparative investment figures of H1/FY20.

The announcement of new highway projects by the National Highways Authority of India (NHAI) helped the Roadways sector to post a whopping increase of 61.09 percent in H1/FY22. In all, NHAI announced 93 new highway projects and accounted for nearly two-third of the total fresh investment seen in this sector. Of the 93 new projects, 24 projects were of mega size. The top five highway projects of NHAI are:

The National Highways & Infrastructure Development Corporation, the other major investor in the roadways sector, announced 48 new projects worth Rs 9,944.64 crore.

India's exponential growth in data consumption and cloud computing in recent years has created huge demand for data centres. To meet this rising demand, investment in setting up data centres increased impressively since 2020. During the first six months of FY22, 19 more data centreswere announced. Around Rs 34,500 crore will be invested in setting up these centres planned across major cities of India. Some of the large proposed data centres are:

Other major infrastructure sectors like Railways, Ports, Real Estate and Industrial Parks could not scale back to the H1/FY20 levels.

The 13 percent growth recorded in outstanding investment over H1/FY20 was mainly because of increased fresh investment attracted by states like Telangana, Odisha, Haryana, Chhattisgarh and Uttar Pradesh. While the table topper Gujarat registered a meagre growth of 3.71 percent over the H1/FY20 figures, Maharashtra saw investment declining by 35.96 percent. 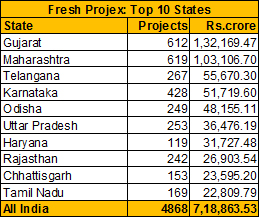 The explosion in the number of COVID-19 cases in the first quarter of FY22 forced state governments to declare partial lockdown. This led to fall in fresh investment announcement in that quarter. By end-August 2021 the severity of the pandemic started receding, which allowed state governments to permit limited economic activities and partial opening up of public transport systems. As a result, new projects announced gained pace in Q2/FY22.

Responding to the request of Union Minister of Finance Nirmala Sitharaman to front load their capex plans, the Central government companies and agencies upped their fresh investment from Rs 43,543.45 crore in Q1/FY22 to Rs 86,826.85 crore in Q2/FY22. Projects Today expects this trend to continue in the next two quarters of FY22. However, the same cannot be expected at state level, as most of the states are currently facing financial crunch. Projects Today also expect the increase seen in private fresh investment in the last five quarters to continue, albeit at slower rate. Sectors like Textiles, Pharma, Electronics and Data Centres will continue to attract both domestic and foreign investment in the second of FY22 and FY23.

With rapid vaccination, the economy is expected to open up further in the third quarter of FY22 and if the country escapes or manages the wrath of COVID-19 3.0 effectively, fresh investment activities would gain pace in the last quarter of FY22. To expedite this, the Central government should prioritise the timely implementation of the 8,000-plus infrastructure projects listed under the National Infrastructure Pipeline (NIP). In this direction, the recent announcement of the Union government to raise Rs Six lakh crore through asset monetization to part finance the NIP projects is a right move.However, the big question is how fast the government would manage to transfer those assets to private players and collect the much-needed money?

ProjectsToday.com is India's largest online databank on new and ongoing projects in India. Its research effort is dedicated to track the ongoing investment activities across the country in diverse economic sectors. Hence, details on all investment projects - whether merely envisaged or under implementation - can unfailingly be found in the website, www.projectstoday.com. Projects Today also carries relevant Project Tenders, Contracts awarded, Project statistics. The site also provides news and analysis on various industrial and service sectors.