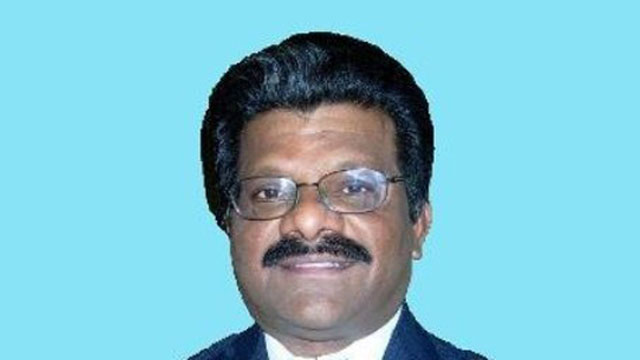 A rapid fall in the number of COVID-19 cases and the relaxation in the lockdown rules by many states, allowed the Indian corporate sector to resume business activities on full scale in the last quarter of FY2022. Further, the revival signs seen in the economy and an increase in the capacity utilisation ratio made the Indian private sector increase its investment intentions further in the last quarter of fiscal 2022.

In this Survey, we have tried to gauge the yearly fresh investment trends by comparing the capex figures of FY2022 with the similar statistics of FY2020 (pre-COVID year).

The revival in investment intentions in the traditional sectors like Petrochemicals, Steel, Cement and Automobiles coupled with the announcement of a good amount of fresh investment in the Sunrise industries like Electronics, E-vehicles, Data Centres, Solar power and Warehousing saw a healthy surge in fresh investment in FY2022. As observed in our earlier surveys, the surge was led by the private sector.

In all, fiscal 2022 saw a record fresh investment announcement in the country in the years. During the just concluded fiscal, 10,445 new projects entailing a total investment of Rs 19,27,214 crore were announced. When compared with the similar figures for FY2020, this indicated an increase of 77.5 percent. During FY2020, in all 9,307 new projects worth Rs 10,85,731 crore were announced.

Though all-out efforts are on by the Union government to revive capital expenditure activities in the public sector at both central and state levels, fresh investment activities are yet to pick up the desired pace. On the other hand, the private sector, including both Indian and foreign companies, seems to be keen to cover up the setbacks it suffered in the last two years due to the pandemic induced nationwide lockup.

The fresh capex was widespread across the sub-sectors like Cement, Petrochemicals, Steel, Machinery and Automobiles (including Electric Vehicles and Lithium Ion batteries).

Barring a couple of private coal mining projects by the Adani, Birla and Tata groups, bulk of the new investment was proposed by the central government-owned Coal India and its subsidiaries.

The reverse was the case in the Iron ore development projects. Of the 13 new projects worth Rs 19,751 crore, only two were by the state-owned Odisha Mining Corpn. A Rs 4,075 crore project of Rungta Mines was the largest private project announced during FY2022.

In the conventional power sector, the hydel power project sector attracted 18 projects entailing a total investment of Rs 52,975 crore in FY2022. Of this, six were mega projects worth Rs 51,240 crore. Of the 18 projects, nine were by private promoters, which included mega projects of Greenko Energies, JSW Neo, Semalia Energy and Naba Power. The declining trend in new projects in the thermal power project continued in FY2022.

Infrastructure: Reflecting the slowdown in the capital expenditure plans of state government units, the total fresh investment committed in the Services & Utilities (Social and Transport Infrastructure) increased by 20.78 percent over FY2020. As a result, its share in the total fresh investment decreased sharply from 67.74 percent in FY2020 to 46.09 percent in FY2022.

Though roadbuilding activities slowed down during the lockdown period, announcement of new highways and roadways projects by the National Highways Authority of India (NHAI), National Highways & Infrastructure Devp. Corpn. (NHIDCL) and various Public Works Departments (PWD) at the states level continued at the usual pace. In all 1,611 new roadways projects with an investment of Rs 2,51,796 crore were announced in FY2022.

Nearly half of the total fresh investment seen in the Roadways sector was initiated by the NHAI. While NHAI announced 183 new projects involving a total investment of Rs 1,19,557 crore, NHIDCL announced 51 new roadways projects worth Rs 11,691 crore. Most of the remaining projects were announced by state-owned agencies.

In FY 2022, NHAI floated 784 project tenders worth Rs 1,23,172 crore to ground its highway projects by awarding the same to private contractors. NHAI also finalized 205 highways contracts with an aggregate value of Rs 1,40,020.58 crore.

The two mega airport projects announced in this segment were by the Adani group. The group plans to expand the Ahmedabad International Airport capacity by investing Rs 18,000 crore and that of Mangaluru Airport at Rs 5,200 crore.

The Real Estate sector, which was badly hit by the nationwide lockdown and is saddled with huge unsold inventories, saw announcement of 1,540 new projects worth Rs 1,62,235 crore and registered a growth of 49.4 percent. While Projects Today covers Real Estate projects of major developers, it has been reported that revival in Real Estate activities has been observed in smaller cities too.

Irrigation: Funds starved state governments seem to have withheld their capital expenditure plans on new irrigation projects. The fresh outlay in this sector after increasing from Rs 23,862 crore in FY2020 to Rs 75,177 crore in FY2021 declined sharply to Rs 13,223 crore in FY2022.

While the largest investment proposal in this segment was by the Reliance Industries, which proposes to set up a Green Energy Giga complex at Jamnagar, Gujarat at a total investment of Rs 60,000 crore, other sectors like Data Centres, Electric Vehicles, Lithium Ion batteries, Solar Photovoltaic cells and Warehousing attracted good number of investments.

The most promising Electric vehicles sector attracted 28 new projects to manufacture four and two-wheelers at a total investment of Rs 13,456 crore. To complement this industry, 18 Lithium Ion battery manufacturing units were also announced at a cost of Rs 20,690 crore.

A Rs 3,100 crore Hansalpur Electric vehicles project of Suzuki Motor Gujarat, a Rs 2,500 crore Electric scooters project of Simple Energy were some of the mega projects announced in this sector.

To meet the increased demand of e-Commerce companies and exporters around 102 Warehouses, Cold storage, e-Commerce fulfillment centres, and Multimodal logistics parks are coming up across the country at a total investment of Rs 12,237 crore.

The second ranked Maharashtra, though bagged more projects than Gujarat, had to settle with a total investment of Rs 1,89,372 crore. Maharashtra was followed by the southern state, Tamil Nadu with 521 new projects worth Rs 1,72,975 crore. The state ranked second in terms of private fresh Capex in FY2022. 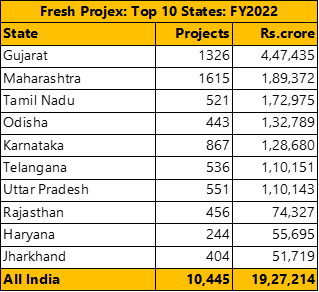 The buoyancy seen in the announcement of new projects in FY2022 is most welcome. The country badly needs huge Capex spending at this point in time to ensure a sustained economic recovery with increased employment openings at the earliest.

However, the worrying factor is the slow pace of capex spending by the government sector, especially at the states level. Unless the government spending on infrastructure catches up fast, most of the private mega private projects will remain on the drawing board.

Projects Today expects the promised capex spend by the Central government on infrastructure projects listed in the NIP to gain traction in FY2023. This is required to keep intact the animal spirit displayed by the private sector in announcing new projects in FY2022.

At the states level, the capex spending will continue to be subdued at least in the first half of FY2023.